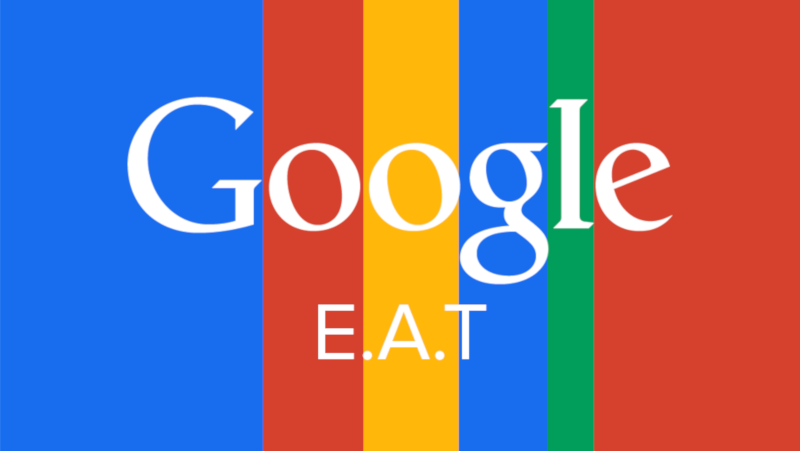 SEO professionals can’t stop talking about EAT at the minute. Since the August “medic” Google algorithm update, most SEO agencies have been focusing almost exclusively on building E-A-T for their clients’ websites.

But what does E-A-T stand for? How important is E-A-T as a ranking factor? How will the importance of E-A-T in Google’s algorithm change over time? In this article, I’ll answer all of these questions as thoroughly and honestly as I can.

EAT is an acronym. It stands for “expertise, authoritativeness, and trustworthiness”. It was first seen when Google’s Search Quality Guidelines were “leaked” back in 2014. Since Google never publishes information about its algorithm, a leak which revealed explicit criteria for webpage quality was big news.

Here is a very brief overview of what Google mean by “expertise, authoritativeness and trustworthiness”:

That is what E-A-T stands for in detail. At least that’s according to Google’s search quality guidelines.

But you and me both know that Google is rarely honest in its public pronouncements. In fact, they haven’t publicly confirmed that E-A-T is a ranking factor (as they never confirm ranking factors). Their spokespeople just keep saying that people should focus on Expertise, Authority, and Trustworthiness – that isn’t the same as being a ranking factor.

So is E-A-T a ranking factor?

Is E-A-T a ranking factor?

These EAT guidelines might strike some of you as quite vague.

It’s hard to see how a bot can accurately determine what constitutes an “authority” in a given market or niche.

This is pretty worrying, especially when you consider the fact that Google claims E-A-T will become one of the most important ranking factors in the years to come. Apparently E-A-T is already among the top 3 considerations for Page Quality.

If EAT is really having such a massive impact on your rankings, then if the bot misinterprets your authoritativeness or expertise in a certain area, you could really suffer. Reputable sites could disappear overnight and be replaced by shills pushing harmful medical advice if the algorithm misjudges what it means to be an “authority” on fasting, or sleeping pills, or pregnancy advice (to give just three examples from a pool of millions).

So how can an algorithm tell the difference between a greedy Instagram ‘guru’ and a credible researcher wanting to share reliable information?

The answer is, it can’t.

Google’s bot will never be able to accurately gauge the expertise or authoritativeness of an author.

Or more accurately, Google’s algorithm cannot possibly judge expertise, authoritativeness or trustworthiness in the same way a human can.

Until humans are deciding on the value of each individual webpage, E-A-T will never be a ranking factor in the way Google wants us to believe it is.

It’s amazing to us that E-A-T ever became such a hot topic.

The search quality rating guidelines is a 157-page document given to a small group of (human) Google employees. These people are given a set list of websites to rate according to the criteria laid out in the guidelines.

What does this mean in practice?

First of all, E-A-T is not a ranking factor in and of itself. The search quality rating guidelines are not part of Google’s algorithm; the decisions made by the raters might influence changes to the algorithm going forward, but they do not influence it directly.

Secondly, E-A-T is not the only thing in the search quality rating guidelines. It is one of many criteria that a rater is to consider when deciding on the value or quality of a page. It isn’t even the most important factor to consider (the guidelines don’t provide a strict hierarchy).

So E-A-T determines a website’s value only to the extent that a rater includes it in their analysis. If your site happens to be appraised (for example, if you submit a post-penalty re-index request), then E-A-T will be one of many factors used to evaluate your site.

I have now conducted dozens of live tests on the importance of EAT as a ranking factor.

The results are pretty unanimous – EAT is at best a correlating factor for SERP positions.

Sites that rank high tend to have good EAT signals, but EAT is not causal.

You only need to take a look at some sites currently ranking for high value search terms to see what I mean here.

You would think that any page ranking for “what is e-a-t?” would be a prime example of expertise, authority, and trust.

One page currently ranking for “what is E-A-T” is about 800 words long. It has no outbound external links backing up the claims made by the agency; you’d think this would be easy to do!

The page has an author, but the author bio page just lists some companies that he has supposedly written for or appeared in:

There is no way for a bot to corroborate any of this, at least not without doing some serious sleuth work on the man in question. Anybody could create a page like this and claim the same credentials.

The page doesn’t provide any new, original information, any test results, or any evidence whatsoever.

The company does have some good reviews, which Google deems important enough to give the page rich snippets – I mean, there’s no way a company could fake Google reviews!

We’ve seen this before on pretty much every shady supplement site in existence. Same goes for the gambling, finance, and health-related sites, where a lack of E-A-T is the norm despite sites having monstrous organic traffic figures.

So why is this page – about E-A-T no less – ranking so high?

The answer seems to be a mix of keyword density and backlinks with good anchor text diversity. Here are the backlinks pointing to the page in question:

And here is what the anchor text looks like:

As you might have guessed, this page has more links and better anchor text than its lower ranking competitors.

Amazingly, despite the advice of John Mueller, this agency has not just been “making great content” and letting the links roll in naturally.

Low and behold, it worked!

The page has almost no E-A-T to speak of; at least none that can be discovered on-page. Yet it is doing very well for this agency.

They are relying on proven SEO methods and they are being rewarded.

But keyword density, links and anchor text are not the only variables at play here. The page is benefiting from some form of “E-A-T boost”.

It’s just that Google doesn’t want you to know how it really identifies and rewards expertise, authoritativeness and trustworthiness!

As has always been the case, the sites that are ranking well today are sites with the best backlink profile.

This of course opens up lots of room for abuse. Get your hands on a site with links from the NYT and Scientific American, and BOOM – instant E-A-T!

While this is very difficult to execute in practice (and it can get you de-indexed), it is clear that using links to judge E-A-T is not the same as E-A-T being a ranking factor. If you are judging E-A-T on quality of links, trust flow, or anything like that, then the ranking factor is not E-A-T; it’s the quality of links, or trust flow, or whatever.

One of the stated reasons for the introduction of E-A-T to the rating guidelines is the problem of untrustworthy YMYL sites.

YMYL stands for “your money or your life”. YMYL sites are websites which deal with subjects related to finance, health, fitness, or anything else that could potentially harm a person if the advice given is bad.

You know exactly what kind of sites we’re talking about here. The most common YMYL sites people will come across deal with:

It’s clear that these kind of sites can potentially cause a lot of harm if the advice they’re giving out is bad. I’m sure you know that there are thousands of websites out there pushing awful, potentially lethal diet advice just so they can make some ad revenue.

E-A-T guidelines are supposed to make such behaviour more difficult.

While it is difficult for Google’s bot to tell if a person really is an authority on the keto diet or if they have expertise with investments, it can tell whether or not that site has been endorsed by sites it deems as 100% reputable (e.g. the BBC, the Guardian, Springer, WebMD, and the like).

That’s how E-A-T works in practice.

You are what you E-A-T…sort of

A website’s perceived expertise, authoritativeness, and trustworthiness is important. If Google thinks that your site has no business ranking for the terms it is, it will penalize you. Similarly, if you have the signs of E-A-T that Google recognises (links from trusted sites and GMB listings), you will benefit.

But pursuing E-A-T as though it were something more than links and Google My Business listings is bad SEO.

SEO is about manipulating an algorithm, not confirming to vague ideas of what another person might deem “expertise”.

As MD of one of the leading Manchester SEO agencies, I only look at what the SERPs tell me. Today, it is clear to me that E-A-T as defined in the rating guidelines is not a ranking factor.

Google want us to believe that E-A-T is an important ranking factor so that we do their job for them; sites are already policing themselves, fact-checking their stories, beefing up their author bios, and providing extensive user contact information.

But none of these E-A-T criteria influence rankings in any meaningful way.

Do yourself a favour. Before you take what the gurus are saying about E-A-T at face value, look at the SERPs and see what’s ranking for yourself. I promise that you wont see as much expertise, authority or trustworthiness as you might imagine!

E-A-T is an acronym used in SEO. It stands for expertise, authority, and trustworthiness. The concept came into common use when it was leaked from the Google Search Quality Rater Guidelines – the rules Google gives its website raters to use when doing things like manual reviews. E-A-T exists exclusively as a concept in these search quality guidelines.

Nobody has ever proven that E-A-T is a ranking factor. Our tests repeatedly show that the algorithm cannot properly judge E-A-T, or that it is at least easily faked.

Is E-A-T important for SEO?

Our tests are quite conclusive on this; E-A-T is not a ranking factor. Or rather, Google’s algorithm cannot judge expertise, authority, or trustworthiness at all. We have not seen a correlation between better social signals, having real, expert writers, or providing good, accurate content and better rankings. So no, E-A-T is not in itself important for SEO. Correlations between E-A-T and rankings are not causal, but incidental (sites with better E-A-T tend to spend more on links, have better guest blogging connections, etc).

How do I increase my E-A-T?

If you want to impress Google’s human raters, then you’ll have to become an expert and genuine authority in your field. But if you just want to rank in the SERPs, then you need to satisfy the algorithm that you have sufficient E-A-T to feature on the first page. A Google My Business page and high quality links from reputable websites (newspapers, journals, etc) seem to be the two main factors.

What is an E-A-T update?

An “EAT update” is a word used by SEO professionals to describe a Google algorithm update which they believe has focused on E-A-T signals. As discussed, in practice this would mean an E-A-T update focusing more on metrics such as “trust flow”, backlink profile, and GMB data. The “Medic” update is often described as an E-A-T update, when in fact it seemed to have focused almost entirely on links (which is why so many spammy dropped domains started ranking for high-value terms again).